I was home alone today and coincidentally the movie HOME ALONE was playing on some TV channel. It stuck me that I had never watched the very first movie of this series. The movie had already started and I missed the beginning. Little Kevin was looking so adorable. The scene going on was Kevin wakes up in the morning to find his family missing. Kevin’s parents were on flight to Paris and were recollecting if everything is in place and all kids are settled. 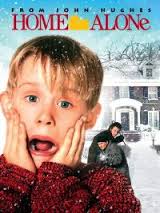 The usual self of mine starting comparing me as a mom and Kevin’s mom. I am so clear I will not leave my child alone and that too without informing. That’s what had happened, I first thought. Later on I realised that they had forgotten to get him along. That infact was more difficult to digest. I mean how can you forget your child. (I had missed the beginning, told you !!)

I was unhappy with Kevin’s parents. But then as I saw the movie ahead and their urge, desperation and struggle to get back home and to reach out to him, I was relieved. To me, they qualified as good parents as per my assumed standards.  For rest of the movie, I never again was judgmental about their actions. Why I became so personal about all this, is still a question to me.

Rest of the movie was fun. Towards the end, when the family reunites, Kevin hugs his mom, I almost cried. Probably because I was imagining myself in the role of the mother who is meeting her child after a while. I recently had that experience. Happy ending. Happy feelings. Phew.. Movie 1 finished. Yeah.. back to back I saw another movie.. TAKEN

A daughter who wants to go on a foreign tour with her friend and is seeking for her dad’s permission. Mom is already on her side and is trying to get the consent from dad. Its something I know I would be witnessing some years down the line, when my daughter reaches that stage. Moms are always the soft target and given the responsibility of being devil’s advocate. I was really moved to see the chemistry between father and daughter or more importantly, the love and affection of the father towards his daughter.

Whenever I see my husband and my daughter playing, having fun, doing some mischief together, its a feast for my eyes. I feel so happy and contented. Of course, there are times when arguments, scolding and fights happen. That’s okay.

Again I slipped into the the judgmental mode. The dad in the movie, was an ex-serviceman and during his service, he gave very little time to his daughter. He is immensely caring and protective about his daughter. The instructions which he was giving her (call once u reach, call me every day), I remembered my good old days when my dad used to give me all such instructions. Even now he does and I am still the same.. not fully compliant.

All parents perhaps know that kids will never listen, however they still give all the instructions. And all kids know that they may not follow all the instructions, still they promise to do so. Now a new worry has started.. what will I do if my daughter doesn’t listen to me or take my instructions seriously? Even now as a toddler, she shows all the signs of being independent and a confident decision maker. Will I be able to take all this in future? Probably I need to gear up for that, as in some ways I am still the old-fashioned parent.

Coming back to the movie, the dad tried to explain that the world outside is very different. He has seen a lot during his service days and so is against his daughter going out there alone. He offered to be her invisible bodyguard as well (which 17 year old child will accept this!!). Finally he agrees (parents are helpless at times) and tells her that if she has any issues or problem, he’ll come to get her (that is the main story line)

This girl is caught in trouble and her dad rescues her just in nick of time. The care and the desperation of the father trying to find his daughter was so well portrayed.  That “anything for you” attitude, I also find in my husband for our daughter. Touch wood.

The realisation for me from both the movies was.. once a parent.. you are always a parent. The other relationships may or may not remain the same always. But to a parent, you are always a child. And your parents will be always there for you and care for you. I have experience this in my life and same was depicted in reel life too.

It was an emotionally intense day for me today. We were planning to go for a movie today (yep hat-trick) and I suggested to select something which is not emotionally appealing. There wasn’t anything of my choice. My husband has never understood this and wonders how can I get affected by movies so much  Earlier, I used to explain  him why and what of it. As it is known.. Men are from Mars, and Women are from Venus.. the difference remains unexplained and the argument continues..

Exactly opposite of what is usually thought about monopolist companies and others. #foodforthought #interesting #perspective #zerotoone #currentlyreading #readersofinstagram #booklover